The Unity of the Scroll 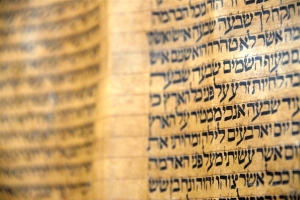 Just before Rosh HaShanah, I had the pleasure of being up close and personal with a Torah scroll. My mentor, Dr. Hollisa Alewine, author of the Creation Gospel, was preparing to sing the Akedia (Binding of Isaac) for their Rosh Hashanah service. I was like a fly on the wall watching her careful handling of the leaves (pages of the scroll) and the Words. The Scroll was rolled out to reveal Bereshit (Genesis) 22 in the Torah.

Although I’ve seen Torah scrolls open before, this time was different. As a matter of fact, many things really resonated down to my bones at this particular season of teshuvah. I gazed upon the leaf with its beautifully penned black letters. The deer skin hide upon which they were written 300 or so years ago had turned into a rich amber patina. What struck me so hard was the flow of the Hebrew letters. I was instantly reminded of the River of Life.

I knew that the vowel points would be absent, but the lack of spacing between the words caused my eyes to see (in the spirit) the unity and oneness of the Word of God. Each section of the Torah appears as one ginormous vowel-less Word! To put it another way, each letter is one building block in a stream of continuous Truth. There is no separation. No division. Nothing is disjointed. Everything is connected and cohesive. Removing even a single letter would diminish the beauty, oneness, and unity of YHWH’s Word.

However, to make these consonant letters come to life requires breath or Spirit. One must open their mouth and like a shofar become the vowels that ignite the fiery Words of our Elohim. The ebb and flow of the cantillation flows like rushing waters from the flesh of the Living. The scroll is made from the flesh of a beast created on day six, but it is the spirit of a man/woman made in the image of Elohim that gives it life. Are we a vessel that gives the letter life? Or is our focus only on the dead things of the flesh?

Though touching the letters can harm the scroll’s integrity, I was able to touch the baby soft under side of the scroll. A beast only shows or gives access to its most vulnerable parts when it is submissive to a Higher Power, the Alpha. When we submit our lower or beastly nature (flesh) to the Word of the Almighty God, we become like the deerskin scroll. Through the death of our flesh, we become a living testimony to the Life and Light and Power of a Greater Resurrected Life.

The Words of Life are inscribed on the flesh (of a beast). You are either a man (woman) created in the image of Adonai or you are ruled by the lower nature, the image of a beast. This is true in the beginning in Genesis 1 on day 6 and at the end in the Book of Revelation. Abba desires that His Word be upon a heart of clean flesh. Long after these flesh and blood bodies have worn out and passed away, the Word written on hearts of flesh LIVES.

When Abba teaches a lesson, He usually gives more than one example. When the Hidden Day (Feast of Trumpets) finally arrived, I witnessed this same message through the Living Stones of the people at the Olive Branch. During the service this same scroll was carried around the assembly in a processional and then lifted up high before the people. The Body was One with her King. The King was the focus and the unity was profound. We were of one accord, all connected like the letters on the scroll. All flesh was submissive showing its soft under belly to the Master of the Universe.[1] Words of Life were being etched upon clean flesh.

When Dr. Alewine began to sing the Akeida, the Shekinah (Divine Presence) was heavy and awe inspiring. I could barely stand on my feet. Abraham was willing to take the thing He loved most in this world and give it to Adonai. We also must be willing to submit ourselves to one another and to our King. Flesh must be sacrificed before one can enter the Presence. This is how unity is accomplished and where the glory of Adonai dwells. (Ps. 84)

During these Days of Awe, my prayer is that we learn to walk out the unity of the scroll. We are the Living Letters of Life that flow out from the throne of the King of the Universe. When we open our mouths of flesh, may they be filled with truth, mercy, and righteousness. May we be vessels of reconciliation, love, and light.

[1] The unified Word written on flesh is not just about submitting to the King. It also requires submitting to and loving one another. These are the two great commandments. We will continue to see divisions and separations when the beast (person ruled by the flesh) reigns in our hearts and in our midst. May Abba send us a minister like Nathan to tell us that, “we are that man/woman.” If we have given ourselves over to the beast/flesh, may we repent.

5 thoughts on “The Unity of the Scroll”